Summer in Paris is one of the best times to be in the city. From free music festivals, to museum exhibits and Bastille Day, there is so much to do!

Bijoux d’artistes at Les Arts Décoratifs
Stop by and admire the most beautiful jewels of the 20th century through an extraordinary exhibition at Paris Les Arts Décoratifs. Running from early spring to midsummer the exhibition gathers about 250 jewels from private collector Diane Venet in a variation expanding from “(…) Picasso to Jeff Koons”.

One of the biggest hypes in the city of Paris this spring/summer. Margiela is having several retrospect exhibitions bringing his years back to life. Most definitely worth a visit and mentioned by Vogue, Dazed, and even New York Times. It doesn’t matter if you’re interest in fashion, this exhibition is about experiencing the world of innovation.

Artistes & Robots at the Grand Palais 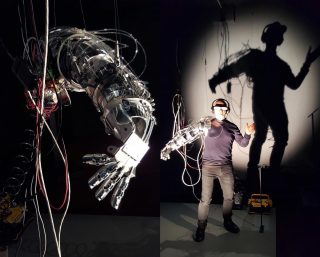 This is THE exhibition of 2018 at the Grand Palais. Artistes & Robots presents works by 20 creator/artist robot that drive humans into a corner. Can a robot replace a painter or a sculptor? Discover the paintings, sculptures, immersive installations, and music created by computers and robots programmed to be “artists.”

Chagall – Malévitch – El Lissitzky at the Centre Pompidou
Take a step into the cultural rise of post soviet World War I through renowned painters such as Chagall, Malévitch, and El Lissitzky. All part of the early avant-garde movement from 1918-1922 that marked the modern art history. At display at Centre Pompidou.

Kupka, Pioneer of abstraction
A retrospect on one of the fathers of abstract art. Grand Palais aspires to take the guest on a journey through Kupka’s career in the 19th century up to the post-war era while simultaneously revisiting the history of abstract art and its roots in Central Europe. A must for the art historian fanatics! 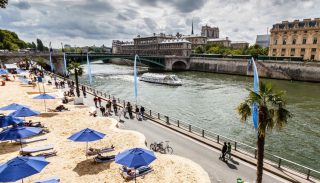 During the summer, Paris turns into a “seaside resort” and welcomes Paris Plages. In the new Parc Rives de Seine, sun loungers and palm trees pop up along the quay-sides to create a relaxing beach scene by the edge of the water. There are lots of activities for adults and children.

Every summer, several spots around the city are transformed into pop-up beaches, each with its own unique theme. From sandy shores on the right bank in the center of the city to water sports at the Bassin de la Villette, these urban beaches bring a taste of the Riviera to Paris.

Small (cheap) luxuries. Receive a balloon from the pizza man before finding your spot on the canal and soon after you’ll find your dinner being served. Fun eating out option in surroundings of the French youth.

Pari Roller
Every friday night roller-skating is arranged in a 27 kilometer long path closed off to traffic. A bizarre, but cool way to experience sightseeing at night in Paris. 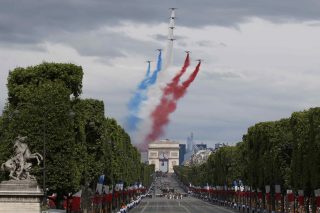 By far the highlight of the summer, Bastille day is a national holiday that is packed with events throughout the day of July 14. Catch the military parade and flypast in the morning on the Champs-Élysées, and fireworks set off from the Eiffel Tower at night.

Festival FNAC Live
An absolute must-go-to, if you’re interested in music and free events! Taking place in the forecourt of the City Hall Hotel de Ville, this festival gathers just about 100,000 spectators each year. It has become one of the leading events in the Parisian summer season offerings 3 days of concerts with thirty or so artists with a wide range of tunes.

The festival welcomes thousands of film fans with a programme of French and international films, both new releases and cult films of the past. Just bring your baguette and portable charcuterie and you’re set to go! (All films are shown in their original language, foreign films are shown with French subtitles) 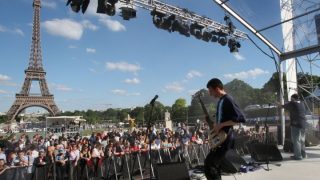 Every year Paris opens up as a space for musicians (amateurs are welcomed!) to cultivate the streets in the midst of summer. A one-day on going party that happens all around Paris where you can either let your spontaneity lead you around or find a specific concert from their website beforehand. An important mention, some metro and RER lines run all night, so you don’t have to worry about getting stranded anywhere in (or around) Paris.

Paris Jazz Festival at Parc Floral
Arisen from two jazz fans back in 1994, the Paris Jazz Festival artfully blends jazz melodies and the harmony of nature. Each year up to 120,000 spectators visit with its wide ranging line-up of both French and major international artists against the blossoming back drop of Parc de Floral.

Fête des Tuileries
A celebration in the heart of Paris, Fête des Tuileries is a traditional fun fair for all sizes in some of the most famous surroundings of Paris. Whether you’re looking for one of its over sixty attractions or just a stroll through the vivid colourful lights.

Of course with the option to snack at any of the various French food stands!

Salon International de la Maison de Poupée
Welcome to the world of miniatures! An international doll house show attracting vintage dolls house collectors from all over the globe. An unmissable exhibition for handicrafts lovers, or anyone else interested in this niche world taking place just once a year.

Paris-Pas-Cher and Life in Paris.